The word is out : Gopy is one of the finest actors on the scene today. With his unconventional but striking looks, he has found a room at the top, not only in the films of his home state Kerala, but lately among discriminating film circles in Bombay as well. In Govind Nihalani’s recently completed Aghaat, he plays a trade union toughie with such cold menace that he strikes terror by just a flicker of his eyes, which itself seem to have been frozen into ice.

Another performance by Gopy has been noticed too, by preview audiences.In Malayalam film maker G Aravindan’s Chidambaram, he is the supervisor of a cattle-farm, haunted by the death of one of his workers.The worker kills his wifewhom he suspects of infidelity before hanging himself. Disturbed and even devastated by the incident, the man goes to pieces.And it goes without saying that only an actor of Gopy’s caliber could have conveyed all the complexities that went into this character portrait.

When he was on a brief visit to Bombay, I met Gopy in his hotel room. Utterly casual, he talks sometimes with a degree of amusement as he thinks acting is no big deal.To him, its easier than brushing his teeth every morning.

Did you ever feel what’s called “ the acting instinct ?”
No, never. I became an actor only by accident.Cinema never attracted me. I was an outsider. I am not a great observer like other actors claim they are.I don’t watch the mannerisms of the people I meet so I can use them later. For me, there is nothing like method acting. I only know that to become an actor, you must have in-born talent, and that’s it.I did a brief role in Adoor Gopalakrishnan’s Swayamvaram in ’72 because I knew him. Then in ’75, I did his Kodiyettam for which I won the Best Actor National Award. The award didn’t change my life but it changed my career.I was suddenly bombarded with assignments. I refused more than I accepted. I only take a role if I like the character. Of the films that I’ve done so far, I am happy with all of them except for two or three which sounded promising at the script-level but were disasters when completed.

What according to you is an actor’s job?
To enact his role once he has accepted it. The talk that actors suffer, go through a lot of strain and spend sleepless nights because they are so involved with the character they are playing, is all humbug. An actor’s life is easy, he has to wear a different set of clothes and change the expression on his face. If there are any restrictions, they are imposed by technique. Like I really feel that the camera is the arch-enemy of cinema. There is a frame and you can’t dare to go out of it, you can’t move freely as you do on stage. If I like the instrument, it’s only because as a technical instrument, because it makes moving images possible.Otherwise I definitely prefer the theatre which is where I started acting in the first place.There was never this feeling of being closed-in.

As a film actor, you haven’t found anything challenging? Any role that excited the creative spirit in you?
No role’s too difficult.Unless you’re put in a physically difficult situation, like you are asked to hang from the edge of a cliff, hold a snake in your hand or fight with a tiger, there is nothing challenging. In Kodiyettam, there was supposed to be a scene with an elephant. Frankly, I am scared of huge animals. I refused to do it and said if it was absolutely essential I’d quit and they could get a jungleman instead.Otherwise am not scared.I can convey any kind of emotion, whether of love or of anger. Of course, I refuse to do rape scenes.They’re highly exploitative and just a cheap way to sell tickets.

You have acted with directors of various temperaments. How did you really adapt to each one of them ?
There is no question of adapting. I exercise a type of acting which I’ve made myself.It’s not natural or realistic acting. It’s just acting. And please don’t ask me to explain what that is because what I do can’t be translated into words. There are thousands of colors and I must know exactly which shade will go what I’m doing.Like when I play a lunatic judge who loves to see people go to the gallows in Sandhya Mayangum Neram.I have to be careful not to sensationalise the character. I have to give him a combination of colors so that he doesn’t come out simplistic or silly.

Adoor Gopalakrishnan is quite authoritative with his actors.He maintains that his actors carry out his orders to the last detail.
Let Adoor believe that if he wants to.But just ask him why he hasn’t tried any non-actors? Whoever he uses has a background in films, theatre or other forms of arts.I didn’t want to act when he asked me to.If I took the plunge, it wasn’t with the intention to becoming great, but just to help a friend’s project.

Isn’t it sad that solidarity went out of the Chitralekha Film Co-operative?
Yes, its unfortunate. When there’s an administrative set-up, the problem of power creeps in.There are ego problems and a friendly venture becomes more petty than a political party.I don’t want to rake up what happened.

You have worked with Mani Kaul in ‘Satah Se Udttha Admi’? What was the experience like?
Mani Kaul’s the No 1 director for actors.He is one of the directors who understands me better that I do myself. This is very evident in the way he explains what he wants from you. Satah was brilliant, more than a biography of poet Muktibodh it was a film maker’s journey towards understanding his subject’s mind. The acting in his film is always exemplary, it makes an actor understand sides to his personality that he otherwise would be unaware of.

How does Aravindan achieve the marvelous balance between celebrating the beauty of his landscapes and getting close to the mind of his characters?
Most of his films are set against the backdrop of wild, unspoilt nature.His canvas is wide though I’m sure he’d be as effective if he was to set a complete film in one closed, claustrophobic room. Aravindan is a gentle director, who rarely speaks.But his silences have more meaning than hundreds of speeches by any orator.

Coming to Aghaat, how did that offer come about?
I think Govind had probably watched Kodiyettam and Yavanika. When we met at the International Film Festival in Bombay in 1984, he asked me if I would do Aghaat. I’d seen Aakrosh and Ardh Satya and knew he was a committed film maker. I agree though I pointed out that my Hindi was poor, but that didn’t turn out to be a problem as I was playing a Malayali settled in Bombay. I didn’t care whether I had to play a hero or a villain. It wasn’t tough to do Krishnan at all though I have never met such a ruthless fellow in my entire life. There was no example before me to follow, that;s why I could be inventive.

It is very likely that you might be deluged with offers to do the villain routine once Aghaat is released. Would you mind becoming a part of the Bombay film industry?
When I’m no part of the Malayalam film industry, how can I become a part of any industry? I have my own viewpoint, my own beliefs. If I have played a “negative” character well, it doesn’t mean I’m going to repeat the act. Even if Govind offered me a similar role again, I’d refuse.Besides, money doesn’t attract me. Who cares for a lakh or a crore of rupees? Once you’ve made lots of money, there’s nothing to do. There’s no other desire left except the desire to die. I’d rather be broke, please.


Do you believe that an actor has a social responsibility?
Ofcourse, he does. He must be an ideal, civilized person so that he can be a model for others.This prevents me from accepting so many films which I suspect will turn out to be crass and crude. I firmly believe there is no harm in playing a bad guy in good films. But if you’re a good guy in bad films, tyhen you’re distorting life for your viewers.

What is the greatest high you get from acting?
It’s a high of another kind.I’m glad that I’m part of the better cinema movement.Slowly but surely, cinema is getting rid of elements borrowed from literature, theatre and music.One day there will be pure cinema.I hope to be closely associated with film makers travelling towards that direction.As an actor, I hope new demands will be made of me.Right now, the most excruciatingthing I’m asked to do is to feel very sad and lonely on a set jam packed with people.Which is very easy to perform because I can switch off in a second and really believe that I have landed on a deserted island.

Last question. Do you ever find yourself acting in real life?
No, I can’t wear any other face but my own. I have always hated masks. 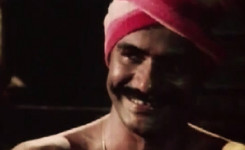 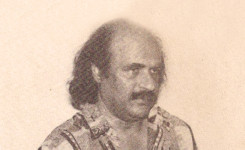