It is difficult for me to write about Malayalam veteran actor Bharat Gopy, who died in Thiruvananthapuram on January 29. The 71-year-old actor was admitted to a private hospital two days ago, after he suffered a heart attack while on a shooting location in Alappuzha district, hospital sources said.

I knew Gopy at a personal level, as a person who worked for the Kerala State Electricity Board, where my father was an engineer. Just like to him, I was always my father’s daughter, not a journalist who went to interview him later.

I had the good fortune to watch Gopy perform on stage. I was a young girl then, and yet the performance was mesmerising. He was not a professional actor then; his love was stage and he associated himself with the great stage directors like C N Sreekantan Nair, Kavalam Narayana Paniker and G Sankara Pillai.

From theatre, his interest turned to cinema through the Chitraleka film society, started by Adoor Gopalakrishnan. After he became a well known actor, he would say, “It was not glamour or money that drew me to theatre and cinema but a passion for both the art forms.”

His initiation into films was through a very minute role in Adoor’s first film, Swayamvaram. He was there only for a couple of minutes but the impact of his frustrated face was so strong that he was immediately noticed. The Guardian carried a story on him under the title “The face of unemployment“. He was an unemployed youth in the film.

Gopi played the lead role in Adoor’s next film Kodiyettam in 1977. He played a moron, who wanders around temples and festivals without caring about his own home, wife or other duties. That was his second film, and he won the National Award –called Bharat award in those days — for best actor.

That was when he became Bharat Gopy.

In no time, he became an essential part of ‘art’ films made by people like Adoor Gopalakrishnan and the late G Aravindan, and also of the ‘middle cinema’ patronised by the late Padmarajan and Bharathan, and K G George. He also acted in Mani Kaul’s Satah Se Udta aadmi and Govind Nihalani’s Aghat.

When filmgoers were ready to slot him as an art film actor, he started appearing in commercial films too. Imagine a thin, balding man as the hero! But he eclipsed even a handsome actor like Mammootty in K.G.George’s Yavanika. Even today, people talk about Gopy the tabla player of Yavanika more than Mammootty the police officer.

He was a meticulous performer. To play the tabla player in Yavanika, he learnt the instrument. He believed that before facing the camera, an actor should know what he is going to perform.

No wonder he began collecting awards then; he was the character in all his films and not Bharat Gopi, the actor. The Kerala state award for the best actor went to him four times. He won an honour at the 30th Asia Pacific Film Festival for his performance as an English professor in Bharathan’s Kaattathe Kilikoodu. A retrospective of his films was organised at Paris by the French government, an honour accorded to select artistes like Smita Patil and Shabana Azmi at that time.

Everything was going right for Bharat Gopy but destiny had other plans for him. On February 1986, he collapsed on the sets and ended up paralysed on one side. A brilliant career came to an end in that one moment.

When I met him after the mishap, he was terribly angry with the cruel fate, angry with the film world that did not bother to help when he was down and out. Slowly, he came back to life and went on to direct Ulsavapittennu with Mohanlal in the lead. The film did good business. His second film, partly autobiographical, Yamanam, about a physically handicapped person won him a national award. He was awarded the Padmashree in 1991.

In 1994, his book Abhinayam Anubhavam (Acting, Expereince) won the national award for the best book on cinema. When I met him after he won the award, he was very excited. He told me, “Even when I got the national award for best actor, I was not so happy. At that time, I was more committed towards the cinema movement, individual achievements that it did not matter to me much.”

Mohanlal and Bharat Gopy in Rasathanthram.

The last film I saw of him was Sathyan Anthikkad’s Rasathantram. He played Mohanlal’s father.

One can only think of what he told me once, years after he was paralysed, “I am a believer in fate, in destiny. I believe everything happens because it is already ordained by destiny. I attribute all that has happened to me, the gains and losses, as the working of my fate. It was only because of this outlook that I could get over the trauma of this illness.”

Actors like Gopy are born only once in a lifetime. Because of the illness, his potential was never utilised fully. It is our misfortune. 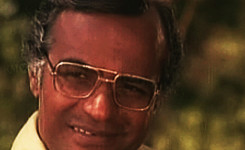