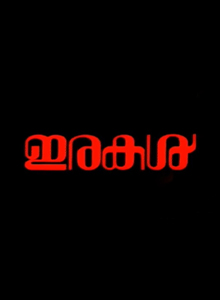 “Prey” – (Lit. Translation)
Directed by KG George from a story he conceived in the aftermath of Indira Gandhi’s political assassination, the movie also started the onscreen career of KB Ganesh Kumar. Irakal (1985) also had the distinction of being the first movie produced by actor Sukumaran. Easily the pioneer in the “slasher” genre in Malayalam cinema, the production was brilliant in its inherent theme of darkness as far as the spaces and the mindscapes of its protagonists were concerned. Irakal went on to win the Second Best Film Award in the Kerala State Awards for the year 1985. Irakal also was awarded the Kerala State Film Award for the Best Story.

Irakal is an in-depth exploration of the psychology of violence.

A ruthless rubber baron Mathukutty, disregards the prevailing moral standards and spawns criminal sons as well as a sexually wayward daughter, Annie. His son, Baby is a psychotic killer who strangles his victims using a nylon wire and is eventually shot dead by his repentant father.

No Songs featured in the Original Soundtrack.

Bharat Gopy as The Cardinal: An Overview.

It was a very brief appearance in Irakal for Bharat Gopy as the Cardinal, but like any actors who are geniuses of their craft, it was more than enough to keep it memorable. The Cardinal could very well be the only “righteous” voice in the entire cast of characters, but yet there again, KG George veritably daubs shades of grey in the dilemma of this high servant of the Lord caught between his moral duties to lead a stray lamb back into the fold and the fierce hostility by the ward to return.

The Cardinal does not have any viable ways left to offer and resigns himself to the consequences of his nephew’s actions as he crumbles into himself with a weariness that is absolutely brilliant. He accomplishes all these with the slightest of nuances and inflections in his tone, but in the few moments that he appears on screen, it feels as if the last vestiges of hope, that of redemption for the young Baby have just been effectively scuttled.

And the Cardinal has only himself and his path of love to blame.