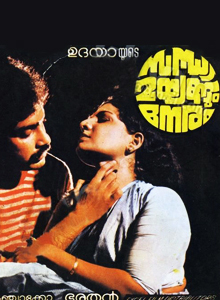 “ As the Eventide Falls ” – (Lit. Translation)
Bharat Gopy had 13 movie releases in 1983 and it was arguably the most creatively fulfilling year in mainstream cinema as far as his onscreen career graph was concerned. Sandhyamayanagum Neram and Kattathe Kilikkodu were his collaborations with Bharathan for 1983 and both became milestones by their own virtue of the brilliantly distinctive and unique themes. Justice Balagangadhara Menon of Sandhyamayangum Neram, conceived by John Paul was so eerily disturbing, eloquent, unhinged and over-the-top. Brought alive in all its glory by Bharat Gopy onscreen, the role also won him the Film Critics Award for the Best Actor, for 1983.

Justice Balagangadhara Menon, with a lifetime conditioned of rigid legalese and regimented applications professionally, now traverses the razor-thin line between normalcy and insanity. Having despatched 10 convicts to the gallows, he slowly slides into a guilt-pit post his retirement from active service, holding himself responsible for the devastation of those 10 families.

His luxurious domestic existence – with his wife, children and his young sister-in-law in the palatial household, somehow adds momentum to this inexplicable slide downhill of his sanity, the “retired hours” giving his overwrought mind ample avenues to short-circuit itself by chasing thoroughly illogical premises and scenarios. And somewhere along the way, his delusions take over his living hours, and the household, now wary of the head of the family moving around unhinged, now slips into absolute terror as the insane and yet legally sharp mind devises scenarios to redeem the self from this pit of guilt.

A Movie Clipping from Sandhyamayangum Neram (1983)

How can you not fall in love with this actor?

Director Bharathan liberally borrowed from the iconic closing shot of the 1957 Swedish drama-fantasyThe Seventh Seal, a film written and directed by Ingmar Bergman. One could say he made it his own, employing it in key sequences and finally in the obvious finale to the onscreen proceedings as the retired keeper of the law steps over to the other side, with a little help from Death.

Bharat Gopy had this to say about his portrayal of Justice Balagangadhara Menon:

When you have to be true to a certain milieu or a situation, you may have to exaggerate to the level required and the result is stylisation. In “Sandhyamayangum Neram” I faced similar problems. I had to portray a judge who starts assuming personal responsibility for his sentences, develops an intense sense of guilt and seeks an insane way of atonement. Not even once in the movie is he shown to be normal.The situation is not life-like. The actor cannot give – the viewers cannot expect – a realistic presentation.

The situation surely was not life-like. And the viewers certainly never expected a realistic performance. It was way beyond that. In terms of expressing the emotional travails of a tortured soul on a chilling trip to the “dark yonder” of his own sanity, there was hardly any scope for the way the next moment unraveled on screen. The very nature of the character, in a way, also guaranteed this passage into the unknown, based on some convoluted logic, that only he held the key to.

Justice Balagangadhara Menon never ever doubted his sanity – even when he crossed over. To him, it was all part of this impeccable logic that was comprehensible only to him.