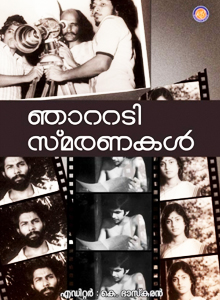 “Bed of Seedlings in a Paddy Field” – (Lit. Translation)
Njattadi (1979) marks the debut of Bharat Gopy as a film director. It is interesting to note that the actor, 3 films old within which he had proved to the nation that he had nothing more to prove (by winning the National Award for the Best Actor in his first film in a leading role), wasted no time in pursuing his next passion in creative expression – that of getting behind the camera. Other than the collective memories of the tight band of craftsmen who made the production a reality, nothing else remains of the movie sadly, save for a bundle of photographs and the cultural markers that weave in and out of the movie, relevant even three decades later. The movie marked the on screen debut of a host of performers, chief among them, the wiry, lanky bearded power house from Malayalam theatre – Murali.

KN Sreenivasan was the producer and one of the actors. The film spins around the life of the protagonist Unni, who is moved by Naxal ideas. There are a couple of catchy songs in the movie. The poems ‘Ormakalil oru Ashareeri’ by Pazhavila Ramesan and ‘Kurathi’ by Kadammanitta Ramakrishnan are used as songs in the movie.

Films follow curious lives. While some films are remembered for their memorable stories, characters or acting, certain films stand apart for their radical otherness and for refusing to play to the dominant tunes of the time. The latter kind is rediscovered as moments in history. The case of ‘Njaattadi,’ debut film by Gopi made in 1979, is one such story. Read More.

The New Indian Express on Njattadi (1979)

What will the result be if a talented actor decides to direct a movie and a talented director chooses to act in it? That too, if that project marks the beginning of a splendid career for both of them. Read More.

A crumbling sheaf of yellowed sheets in an equally aged folder turned out to be the Shooting Schedule of Njattadi (1979), Bharat Gopy’s debut as a director. Here is a day’s schedule from that invaluable collection.

With a shelf life of two screenings and a print of the movie untraceable (at the time of writing this), Bharat Gopy’s debut as a director chose a subject that was close to his heart – the volatile social and political conditions of the 70’s that forced a section of the youth to set off on journeys of self-discovery, at times through the still-unmapped terrains of political ideology that imploded on them, consuming them in the process. Njaattadi spoke of an impressionable youth, brought up on orthodox social systems who decides to comprehend the evolving social ideologies at his own pace and means and disappears one day, and the consequences of the event on his immediate circle of loved ones – personal and acquainted.