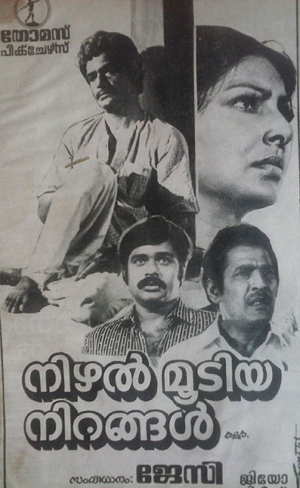 Nizhal Moodiya Nirangal was the only film in which Bharat Gopy collaborated with director Jeassy, and one of the two films in his career with Sharada paired opposite him in a leading role. As with the common thread of Jeassy’s films, Nizhal Moodiya Nirangal is a parade of tragedies that befall an extended family. Bharat Gopy played Unni, the happy-go-lucky younger sibling, on whom suddenly befalls the responsibility of the entire extended family.

Unni is the the younger sibling in the extended family, who is happy in the shadow of his elder brother’s care and the security that it entails. The children are brought up as one with both uncles doting on their nephews and nieces. As the elder brother passes away in a freak accident, the entire responsibility of the family falls on Unni, a tailor by profession, who struggles to keep the family together. Besieged by the increasing demands from the younger generation, he always puts the needs of his elder brother’s children above that of his own, even to the point of having his own go hungry at times. As tragedies befall the family, one after the other, they reach a point where the very meaning of living itself is questioned.

Bharat Gopy as Unni : An Overview

Bharat Gopy as Unni effortlessly traverses a lifetime of pain and sacrifice for the sake of an extended family that he considers his own. In a screenplay that is weighed down by the bitterness of melodrama that most of the times go overboard with its cliched settings and turn of events, Bharat Gopy holds his impeccable composure onscreen, imparting each scene with the right dose of sadness, helplessness and angst, all in an envious balance that makes the predictable, top-heavy drama so watchable.