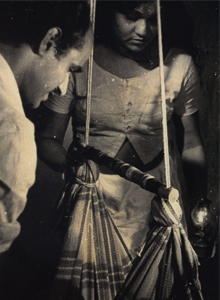 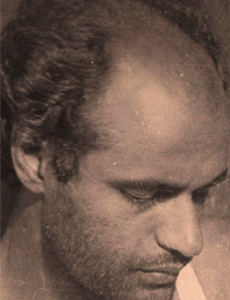 “ The Ascent ” – Alt. Title (Translation)
Though Swayamvaram (1972) was Bharat Gopy’s debut movie (fleeting appearance, if you will), Adoor Gopalakrishnan never thought twice about giving him the leading role in Kodiyettam in the year 1977. In Kodiyettam (The Ascent ), he donned the role of a carefree simpleton who eventually rises to be a mature, responsible adult. Though initially known as “Kodiyettam” Gopy, his spectacular portrayal of Shankarankutty won him the National Best Actor Award (known as the Bharat Award in those days) and got him the moniker Bharat Gopy for life. Kodiyettam (1977) also won the Best Feature Film award in Malayalam.

A streaming pennon goes up the burnished flag pillar and marks the beginning of the annual festival of the village temple. This is Kodiyettam. The theme of this film is the birth of an individual.

Shankarankutty is left afloat sans moorings as the staid traditional societal structure of the village slowly disintegrates. Timid, diffident and hopelessly trying to shy away from the changes around him, he is a character original in conception and universal in appeal. The impact of the modern age shapes him to be an individual confident enough to face the egoistic, inconsiderate, new world. There are a number of ancillary ideas unobtrusively woven into the film’s narrative. The wearing/weaning away of his umblical ties with a maternal society, new relationships in the age of changing values, confronting a technologically dependent civilisation; all these portray the social history of Kerala in personal, intimate themes.

Suggestiveness is the very soul of its style. The camera gathers a bit of reality – a flight of steps leading into a pond, rotting leaves afloat, the drenched roof of the local teashop haunt, the delicate curves of the elephant’s raised trunk – and builds them into an exquisite artifice.

The only background score is provided by natural sounds used meaningfully. The whole film is wrapped in a genuine awareness of human tragedy. As children peering into the fissures of the dried up paddy fields, we get a glimpse of the mysterious darkness that persists under the “perceived” solid ground.

– Excerpt from Ramnarayanan’s Review of Kodiyettam (1977)

A Movie Clipping from Kodiyettam (1977)

How can you not fall in love with this actor ?

My favorite Adoor movie. The simplicity and charm of its narration is a refreshing change from the cliché-ridden patterns of the so-called ‘Art-Movie’ genre. Coming of age story of a village simpleton, told through a chain of events and characters often funny and ocasionally sad, and his ultimate ascent into the responsibilities of adulthood, is the core storyline. The script by Adoor himself is structurally flawless and often poignant. Great austerity is maintained in all aspects of production; from production design to sound design, and it lends the film a credibility and rawness, which only enforces the central theme better.

Adoor’s restraint in using background score, practically none in this movie – I see it as a filmmaker’s integrity towards a realistic representation of the life as it is.

The film moves in a slow rhythm of rural life lingering and dwelling on little things: a man absorbed in eating, a woman washing clothes, a man chopping wood (splinters stick to his body as he wipes the perspiration) or a bullock cart driver singing a philosophical song about the vanities of the world. Adoor is never in a hurry. There is understanding and compassion for the suffering of women in the Indian set up. And the festival in the temple moves with the languorous dignity of an elephant (there is a great sequence of an elephant being bathed as Sankaran watches in goggle eyed wonderment) in paralell with the festival of life in the hamlet .

The Award for the Best Actor of 1977 is granted to Gopy for his role in the Malayalam feature “KODIYETTAM,” for an uncannily truthful and subtle portrayal of a nondescript village character, carrying almost imperceptibly his slow, inner transformation through the inner tribulations of life into a new awakening of consciousness, of feeling and of responsibility, for the artless unfolding of characters, which is evidence of acting ability of a high aesthetic order. Actor Gopy receives the Rajat Kamal and a cash prize of Rs 10,000/-.

The award for the Best Malayalam film is granted to Adoor Gopalakrishnan’s “KODIYETTAM”,for capturing with an unerring eye for detail, the trivia of village life; for presenting through its calculated pace and rhythm, a true slice of a rural culture in Kerala; for revealing through seemingly insignificant vignettes, the gradual transformation of a casual village drifter into a person of genuine worth and true dignity. Producer Kulathoor Bhaskaran Nair receives the Rajat Kamal and a cash prize for Rs 10,000/-. Director Adoor Gopalakrishnan receives the Rajat Kamal and a cash prize of Rs 5,000/-.

In an interview in 2003 to Asianet, Bharat Gopy spoke of Shankarankutty as the “faithful representation of our innocence and humaneness of our childhood that slowly gets replaced by the cynicism and bitterness of adulthood.” Shankarankutty isn’t naive or the village bum as many interpret him to be; he is a human being who has refused to part away with his innate goodness. And that makes him trust and envelop everyone in his world, which others find “childish”. Even as he ascends from this world into the role that he is expected to create based on social rigors and its clunky ritualistic manifestations, the transformation is like a child who takes the first faltering steps to walking erect in a world that until then, he viewed from a different plane.

Shankarankutty was so brilliant in portrayal onscreen that it seemed absolutely natural. You knew a Shankarankutty from your hamlet and your childhood. If you looked deep down inside yourself, you could even find him leaning against the mudwall of your mind, giving you the gap-toothed smile that glowed from the heart. That in effect was the sheer simplicity and profundity of the character. And that was what earned him the legendary Bharat Award.