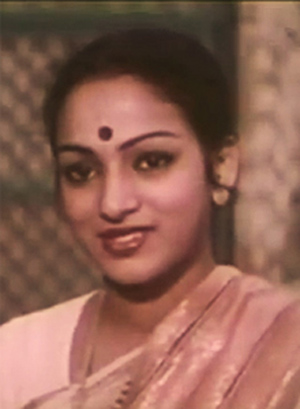 “ The Demise of Lekha : A Flashback ” – (Lit. Translation)
Lekhayude Maranam : Oru Flashback, had KG George bringing in yet another technique into his diverse portfolio of narrative styles – that of a movie about movie making, predominantly told in flashbacks. Based on the life and times of actress Shoba, Bharat Gopy as the film director Suresh with whom the debutante falls in love, subsequently leading to an unfortunate turn of events, brought in the measured performance that is a hallmark of all of KG George’s onscreen creations. Post Yavanika the previous year, Bharat Gopy would go on to be a part of five more productions, including the highly debatable debacle Elavamkodu Desam (1998), and would be the only actor KG George seems to have repeated most, for his productions.

Devised as a movie inside a movie, Lekhayude Maranam : Oru Flashback is about Lekha, a popular actress of Malayalam cinema who commits suicide. Shown in linear flashback narrative, the film goes behind the circumstances, from her life from childhood to the events which lead to her suicide. It is also a gritty portrayal of the “state of the mecca” of south Indian movie making – Madras aka Chennai, which markedly is not much different from what its powerful cousin up north, the Maximum city of Mumbai, offers to the star-struck hopefuls that throng the city.

Lekhayude Maranam : Oru Flashback, participated in the 29th Regus London Film Festival under the aegis of the BFI, and was featured as part of its 3 Continents : Asia category and was critically acclaimed for its content and portrayal.

The outstanding performance in Flashback comes from Shubha as Visalakshi, Lekha’s shrewd, avaricious and ruthless mother. Stage actor Tilakan is excellent as the journalist who puts Lekha on the road to superstardom. Mammootty, the current rage of the Malayalam screen, successfully apes the mannerisms of fellow actor Prem Nazir in his Prem Sagar role. The camera work is excellent.

Bharat Gopy’s Suresh Babu is equal parts hypocrite and skirt-chaser, who cleverly conceals it all underneath his veneer of perceived (?) creativity, most of the times to convince himself. To him, Lekha, the nubile and upcoming actress is another opportunity that could be exploited till it was available, to furthur his means. He has no qualms in basing his “new-found solace” on a clever lie, just to get her between the sheets.

Suresh Babu’s “success” lies in keeping his personal equations open-ended, possible of being interpreted in a whole lot of ways, and all of them true from the observer’s standpoint. It is this haziness that also helps him wiggle out of his predicament, citing surprisingly, his respect towards the institution called marriage, whose vehement denial brought them together in the first place.